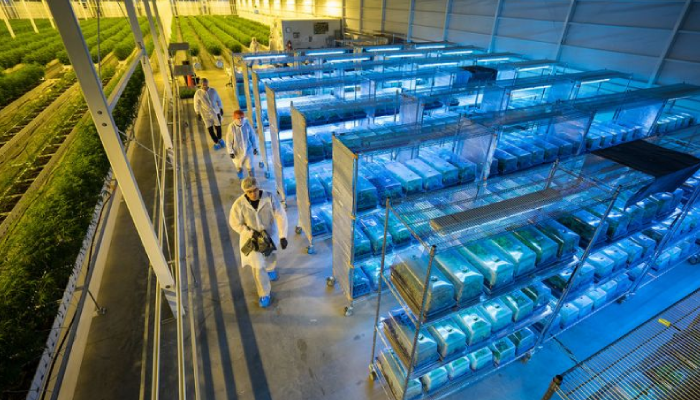 There are now 11 major companies that are on target to produce over 100,000kg of cannabis annually in their peak cycles. Out of all of these, though, there is one that blows the rest away. Aurora Cannabis (TSE: ACB) can reportedly produce more than 700,000kg each year.

For more than a year, Aurora has been leading an aggressive expansion plan to increase its production potential. The plan has been to secure as many lucrative long-term supply deals as possible – provided those deals made sense from a business standpoint – and the mission has paid off. Aurora has operations throughout the world, including in the U.S., Canada, Portugal, Germany, the UK and more.

When Aurora released its fiscal second-quarter financial results at the end of last December, the company affirmed that 20% of all the cannabis sold in Canada in that quarter could be traced to Aurora. This translates into an expected annual run-rate of over 150,000kg by the end of the current month and is far greater than any of the company’s competitors.

By the middle of next year, however, the production amount is going to grow substantially. Aurora asserts that its run-rate is on track to reach more than 500,000kg by that time and this may be a conservative figure.

Aurora recently purchased ICC Labs in South America and Whistler Medical Marijuana in British Columbia. Without including those two facilities, the existing installations can produce 550,000, based on previously released data. Adding in ICC Labs and Whistler, which offer a combined 216,000 square feet of cultivation space – not including the one-million-square-foot space ICC Labs is building in Uruguay – there is enough square footage to add another 370,000kg to Aurora’s production capacity.

This doesn’t necessarily mean that Aurora will need to produce that amount – there isn’t much sense in producing more than can be distributed. However, cannabis is constantly finding favor among state governments around the world, including the U.S. federal government, and it is easy to envision a huge global demand within the next two years. With its international presence, Aurora will already have boots on the ground to be a major supplier to virtually any country.