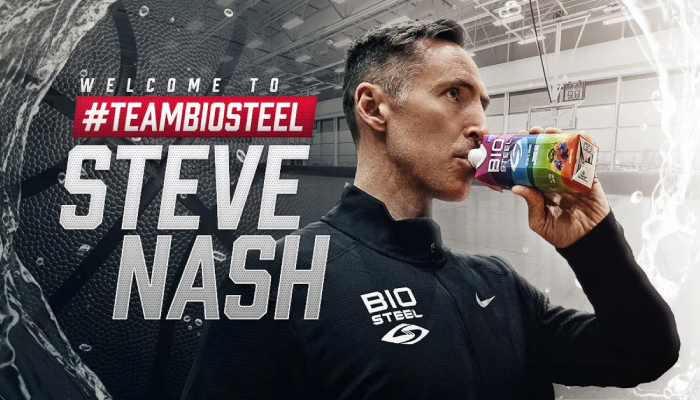 BioSteel, the sports beverage company backed by Canopy Growth, continues to expand its ambassador ranks. Among those already included are Patrick Mahomes, Luka Doncic, Brooke Henderson and more, and now a new face has been added. Steve Nash is the latest high-profile sports name to be brought into BioSteel’s ambassador list.

Nash is the head coach of the NBA’s Brooklyn Nets, as well as a two-time NBA MVP. Nash, who has led the Nets to be the top-ranked team in the NBA this year, admits to being a regular consumer of BioSteel’s zero sugar sports drink and asserts, “I only endorse products that I am passionate about. I’m excited to be working with BioSteel because I have been hydrating with its zero-sugar sports drink on a daily basis for years. The partnership is a great opportunity for me to educate my team, and today’s youth about the importance of clean, healthy hydration.” BioSteel is also the Official Sports Drink of the NBA.

BioSteel has seen significant expansion in the US market recently and is sold at top grocery, mass, gas and convenience stores across the country. It has direct store distribution partners established to facilitate the delivery of products, which include sports drinks, proteins and others. Nash, who has signed a multi-year deal with BioSteel, will help expand the company’s footprint by using his status to raise awareness among both health-conscious consumers and athletes.

Adds Michael Cammalleri, the co-founder and Co-CEO of BioSteel, “Steve Nash was brilliant on the court and it is no surprise he has evolved into an extraordinary Head Coach. Steve has been hydrating with BioSteel’s zero-sugar sports drink for years, and we’re thrilled to officially add him to #TeamBioSteel, to amplify our story and advance our growth.”

BioSteel now has 24 ambassadors in different sports organizations in the US. In addition to its tie-up with the Nets, it is also the Official Sports Drink of the Professional Women’s Hockey Players Association (PWHPA), the NBA’s Toronto Raptors and USA Hockey.