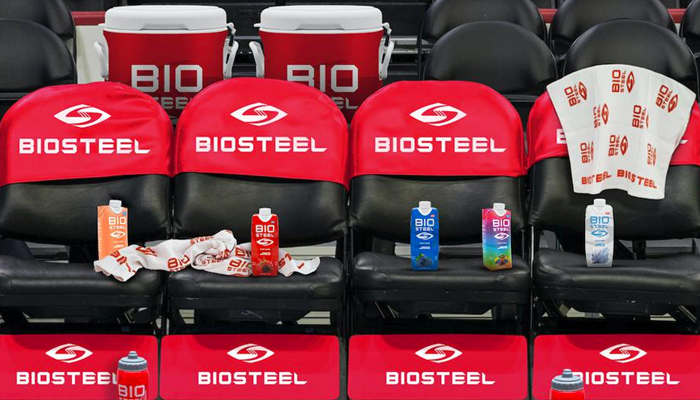 Cannapany on December 2, 2020 No Comments

Canopy Growth has scored a slam dunk with a new partnership signed by its BioSteel sports beverage arm. The cannabis company has been charging fast and hard with BioSteel, positioning it as one of the leading sports drinks on the market and drafting a number of athletes to represent it as official ambassadors. The hard work continues to pay off, and BioSteel has now teamed up with the NBA’s Philadelphia 76ers to become the team’s official sports drink.

The new partnership is a multi-year deal that will lead to great exposure for BioSteel and Canopy Growth. BioSteel is now the team’s partner at its training complex and will be the presenting partner of its training camp ahead of the upcoming NBA season, which is scheduled to begin on December 22. BioSteel has sent Gatorade down to the sidelines, and will appear on home and away chair backs at the 76ers’ stadium, the Wells Fargo Center. The agreement also includes digital signage as well as logo placement on an array of products.

BioSteel co-founder and co-CEO Michael Cammalleri says in a statement about the new partnership, “This is a tremendous opportunity for BioSteel to play a role in hydrating some of the best basketball players in the world and we applaud the 76ers for making a healthy choice by partnering with a sugar-free sports drink company. Similar to our other team deals, the Philadelphia-New Jersey corridor represents a market that BioSteel is entering into. This partnership will help amplify our presence and build awareness for the brand across the region.”

BioSteel already has existing NBA partnerships, as it previously became the official sports drink of both the Brooklyn Nets and the Dallas Mavericks. It also has a strong presence in the NHL, where it is found linked to virtually all teams in the league.

Owen Morin, the VP of Corporate Partnerships for the 76ers, adds, “When we look at partnership opportunities, we want to make sure our brands align. That’s definitely been the case with the 76ers and BioSteel. BioSteel is an innovative, forward-thinking brand that has been aggressive in the sports hydration space and is on the cutting edge of sports performance. They understand the value of relationships with the customers and communities they serve, embrace opportunities to do things differently, and are eager to continually grow and improve.”