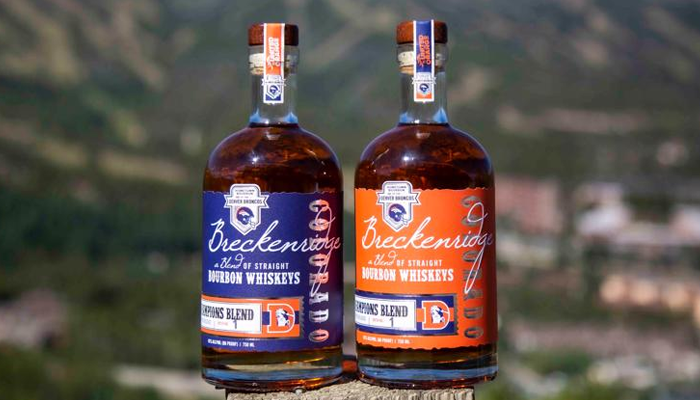 The novel product is arriving just ahead of the NFL season

Tilray and its brands continue to make big moves to grow more and more in their respective industries. In this case, Breckenridge Distillery, considered the ‘World’s Highest Distillery,’ has recently announced two new limited edition Mile High Bourbon blends. Breckenridge Distillery is known for providing the official Bourbon of the Denver Broncos, a well-known NFL franchise.

The new release will be the second Broncos Bourbon commemorative blend in the collaboration series. All fans of the brand over the age of 21 will be able to access the limited-edition bottles starting next week.

Mile High Blends was born out of a competition between Breckenridge head distiller Hans Stafsholt and former Broncos player Jake Plummer (blue) against Broncos Ring of Famer Karl Mecklenburg and Breckenridge distillery founder Bryan Nolt (orange). In 2v2 teams, they met to see who really had the best ability to blend the best bourbon.

Orange Broncos Bourbon Blend brings with it an exquisite aroma of burnt orange marmalade and raisins. This results in a brown sugar with a light cherry wood smoke, rye spice, vanilla, and a hint of black pepper. As for the Blue Broncos Bourbon Blend, crisp apple honey and fresh orange envelop the nose and lead to a creamy orange blossom honey on the palate. It is finished with a light white spice and oak.

In either blue or orange, a commemorative bottle joins these exquisite blends to pay homage to the Broncos’ Mile High Era and includes the classic 1962 team logo on its label. All four members have pooled their expertise to come up with the special recipe and bring Breckenridge Distillery’s limited edition Mile High Bourbon blends to life.

“Last year, we released our first collaboration with the Denver Broncos and the Broncos Bourbon blends were not only a hit with our Colorado fans, but the whiskey industry as a whole,” says Nolt. “We’re so excited to continue our partnership with the Broncos and bring Broncos and whiskey fans across the country our latest release of the Mile High Blends to enjoy this season.”